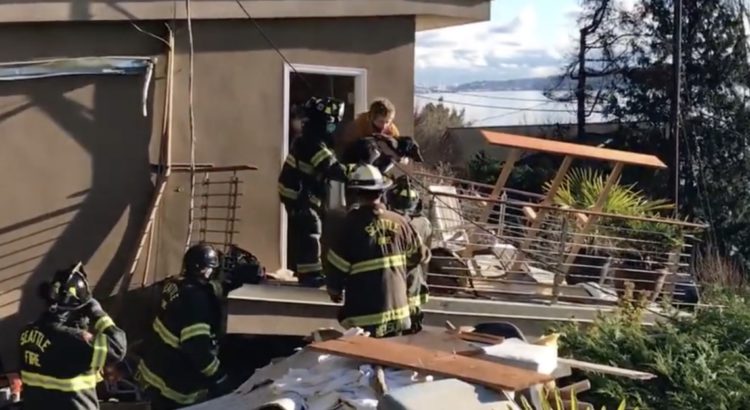 A dog was rescued yesterday after six days of being trapped inside a Magnolia home that slid off its foundation last week.

Heavy rain on Friday, Jan. 7 caused the Magnolia home, on the 2400 block of Perkins Ln W, to slide almost 20 feet off its foundation. James and Didi Fritts were inside when the slide happened; Didi was able to escape on her own but James was trapped inside.

Firefighters used hydraulic struts to shore the structure and stabilize it enough for entry. They found James pinned underneath debris in stable condition and transported him to Harborview Medical Center. One of their two dogs, Lily, was found deceased in the home, but firefighters couldn’t locate the other dog.

But on Thursday, Jan. 13, a family friend passing the home heard noises from within the house. He called the Frittses, who called 911. Seattle firefighters spent two hours looking for the trapped dog and were able to rescue Sammy, who had been without food or water for six days.

Seattle Fire says the accident was caused by a landslide in the steep slope area behind the house, likely due to the nearly two inches of rain that had fallen in the previous day. The landslide caused the top floor of the home to partially collapse on the first story of the home.