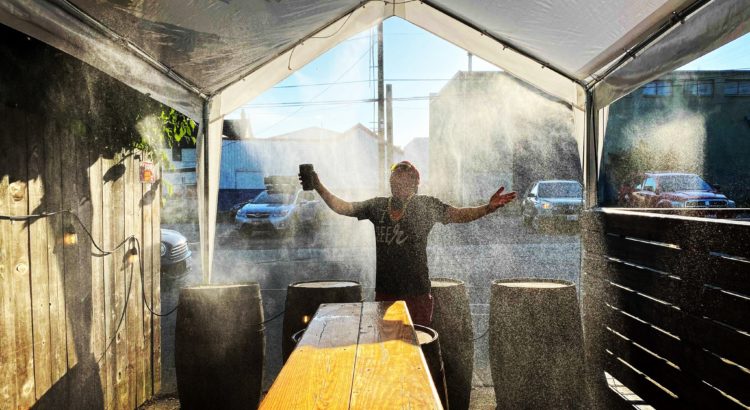 One of the longest-standing Ballard breweries, Reuben’s Brews, is celebrating 10 years in business with a new collaboration series.

Reuben’s started as micro as it gets, with co-founder Adam Robbings practicing his homebrewing techniques for three years before opening his first location in 2012 in a narrow industrial garage space at 1406 NW 53rd St. He named it Reuben’s for his son, who was born around the time he started brewing.

In 2015, Robbings opened the Taproom just down the street at 5010 14th Ave NW, and expanded yet again in 2018, opening a brand new, much larger production facility at 4700 9th Ave NW. The production facility now includes a tasting room called The Canning Line. Another recent addition is The Barrel House, at 1133 NW 51st St.

To celebrate their 10th year, Reuben’s will be releasing a Tenth Anniversary Collaboration Series. Reuben’s will be partnering with 10 different breweries, accounts, and individuals who have been “critical” to their success. They’ll release one beer per month for the next 10 months.

“The success of the past 10 years is a testament to the many different people and partners who have been along for the ride,” Robbings said in a statement about the collaboration series.

“From brewers who inspired and/or encouraged us, to accounts that believed in us, to our most loyal supporters in our mug club, the Reuben’s Crew, we wouldn’t be who we are without these wonderful friends. We’re excited to tell the story of our past 10 years through 10 collaboration brews with the amazing community that helped us get here.”

The first release is the Metamodern PNW Amber, brewed in collaboration with Georgetown Brewing. “Experience this meta take on what an amber ale could be if it was the dominant style of our era,” Reuben’s says about the collaboration. Georgetown Brewing co-founder Manny Chao created many of the beers that inspired Robbings to become a home brewer (think Manny’s Pale Ale, for example).

The collaboration series will include the following brewers and partners: