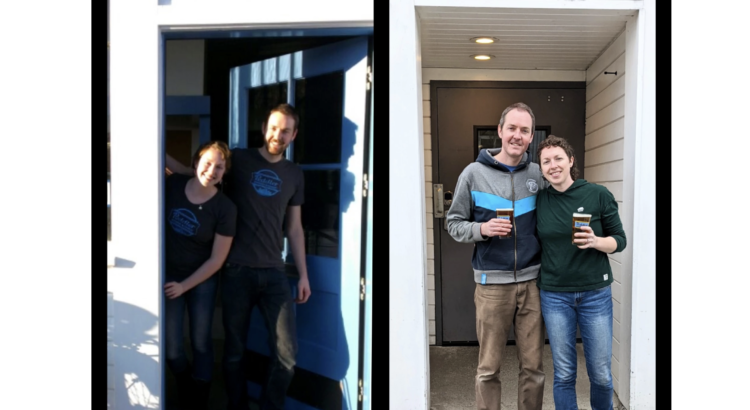 Peddler Brewing (1514 NW Leary Way) will be closing this spring after nine years of selling beer in Ballard.

The owners, Dave and Haley Keller, announced on their website that they’ve decided to leave Seattle and move to Arizona. “Between living through this pandemic and having kids, our perspectives and priorities have changed and we’re ready for a little less stress in our lives and to focus our energy in a different direction,” they wrote.

Peddler opened in March 2013, back when the Ballard Brewery District was just taking shape. They wanted to start a business that would combine their love of beer and biking under one roof. In July 2014, Dave’s brother Mike joined their team, and they’ve been a staple brewery in the neighborhood ever since, hosting regular community events such as movie nights, comedy shows, dog parties, and cornhole competitions.

Dave and Haley celebrated some big events at Peddler over the years, from their wedding reception to baby showers and proposals for friends. They say their sons grew up in the brewery, from napping in playpens to now riding the forklift and riding their bikes around the beer garden.

“We are excited to have made it through the pandemic shutdowns and restrictions and be closing Peddler on our own terms and by choice,” the Kellers wrote.

They say that another brewery will take over the space, but haven’t yet shared which one.

“Through these nine years Peddler has been open, we loved building out this space, creating a wonderful community, and running a family-owned business in the best brewery district around,” the Kellers wrote.

“All our wonderful employees and customers have made Peddler what it is and created many cherished memories over the years. We especially loved all the fun events you have joined us for, brewing a diverse lineup of beers for everyone to enjoy, and the blissful summer days in the beer garden. We are grateful to have had this opportunity to be part of the Ballard community.”

Here are a few of their final events to bid your adieu: