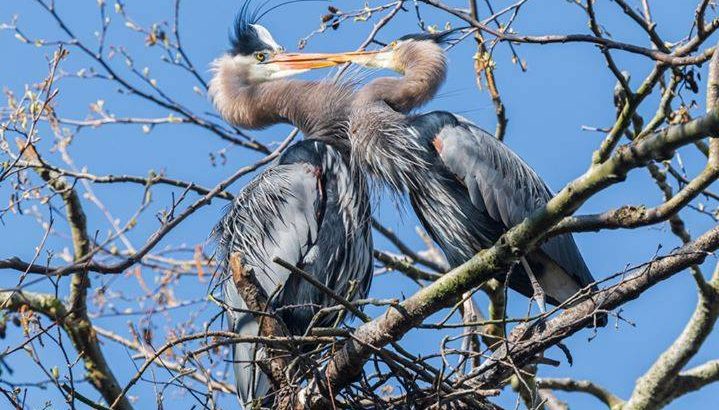 Heron Habitat Helpers is hosting an open house this weekend to recruit new volunteers who can help monitor the resident heron population at Commodore Park.

Created in 2001, the project educates the public about and protects the blue herons and their natural habitat in the greater Puget Sound area.

As part of the habitat restoration, volunteers remove invasive plants and set out native replacements that are beneficial to pollinators, small mammals, and the herons. Besides helping native animals, the plants also filter runoff rainwater before it goes into Puget Sound.

The open house event aims to bring together people interested in volunteering at the project to learn more about the roles and responsibilities of the spots available for the community.

“It’s just a casual chat. So if you’re interested, or even if you’re not sure, and you just want to learn more, there’s no pressure. It’s an outdoor event at the colony, so it’s just a drop-in,” volunteer organizer Marla Master said.

The organization is looking for volunteer monitors, which are citizen scientists that monitor the colony regularly throughout the season, from now until the end of August or September. They’re also seeking volunteers to adopt one of the heron colony’s five habitat areas to maintain and weed on a self-determined schedule.

The habitat areas are located in Magnolia and are within walking distance of each other. Heron Habitat Helpers offers training for all new volunteers, and no experience is required.

“We’re just really appreciative of any effort and time that people want to put in. So there’s no real commitment, in a sense, and there’s no pressure, we’re just definitely looking for people interested in nature and giving back to the community,” Master said.