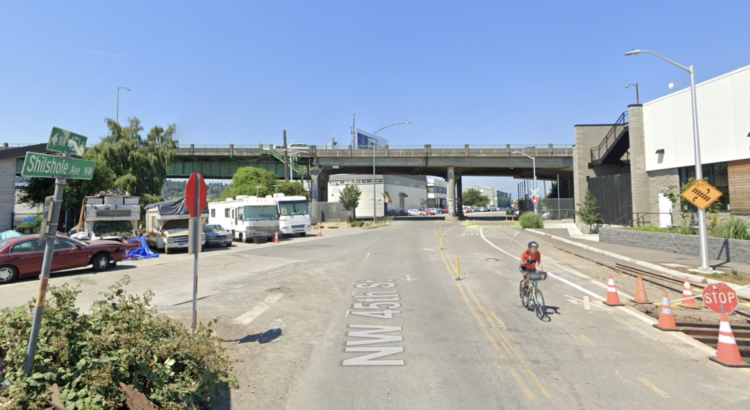 The never-ending project to connect the Burke-Gilman Trail in Ballard is inching forward, as SDOT formalizes plans for safety upgrades along Shilshole Ave NW.

The project to connect the 1.5-mile section of the Burke-Gilman has been in discussion since the 90s, stalled due to the decades-long tug-of-war between SDOT and a group of local businesses and other cycling advocates.

The city’s transportation department has always advocated aligning the new trail on Shilshole Ave NW, while the Ballard Cycle Track group wants to see it built on Leary Ave NW, away from the industrial traffic on Shilshole. Last year, SDOT refined the Missing Link plans to address some of the safety concerns of local businesses.

SDOT’s Ethan Bergerson tells My Ballard that the department is working on completing final design documents and obtaining required permits for right-of-way improvements along Shilshole. Along with making safety upgrades at industrial driveways on Shilshole, plans would eliminate the need to relocate the railroad tracks and associated paving on Shilshole and NW 45th St, which will minimize project delays and expenses.

SDOT says they want to begin the safety upgrades in 2023 and expect seven months of construction.

SDOT’s land use application for safety improvements is open for comments until May 20; you may submit comments online or by mail to the Department of Construction & Inspections, ATTN: Public Resource Center, PO Box 34019, Seattle, WA 98124-4019.