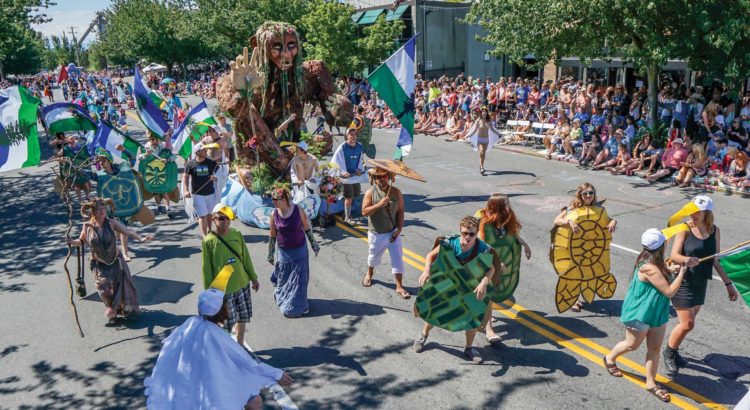 The 32nd annual Fremont Fair and Solstice Parade are returning to the neighborhood this weekend after a two-year pause during the pandemic.

The Fremont Fair will be held both weekend days—June 18 and 19—just west of Fremont Ave N on N 35th St and N 34th St.

The Solstice Parade will be on June 18, with some notable changes this year.

“The route will be a bit different this year as we are reinvigorating the parade after going without for two years – it will end in a fabulous party with art, music, dancing, and all of the creativity of our community in the heart of the annual Fremont Fair,” Cindy Krafft, president of the Fremont Arts Council and organizer of the Fremont Solstice Parade, said in a statement.

This year, the parade will begin at 2 p.m. on Leary Way NW near the cross-street of NW 39th St. It will travel eastbound on Leary Way, connecting with NW 36th St before heading eastbound on N 36th St for a half-mile before turning right onto Evanston Ave N. After one block, the parade will turn right again on N 35th St where the route will finish in the heart of the Fremont Fair, rather than at Gas Works Park as it has in previous years.

The painted cyclists are planning their return for this year’s parade; you’re welcome to join them by following this link.

On Sunday, June 19, the annual Dog Parade will happen at 2 p.m. You can register your pooch to walk in the parade on Sunday on 34th Avenue at the Dog Parade tent starting at 11 a.m.

Live music will be playing on two stages throughout the weekend; check here for the line-up and schedule.