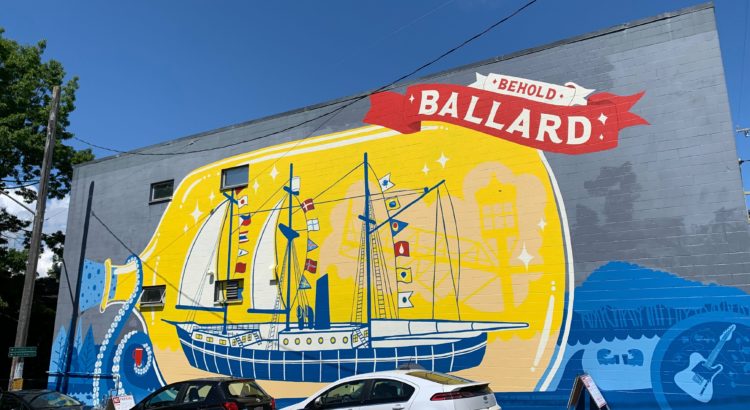 A local artist has created a large new mural on the side of Mox Boarding House (5105 Leary Ave NW) in Ballard.

The Ballard Alliance’s Public Art Program commissioned Seattle-based artist Jen Vickers, who was selected from a pool of 15 applicants, to design and paint the new mural.

“The ship in a bottle concept marries Ballard’s maritime industry to the food and drink culture of the
neighborhood. It symbolizes the complex origination of this popular neighborhood,” Vickers said in a statement about the mural.

“I chose the SS Roosevelt steam-powered tugboat for the mural as it was the ship that led the first flotilla of vessels through the brand new Ballard Locks on July 4, 1917. The most important part of the mural is the land acknowledgement. While the mural serves as a whimsical capsule of Ballard, it’s important to note that European settlers were not the original habitants and that the Coast Salish people and land are honored as part of this piece,” Vickers said.

The mural is the latest in a series of art projects commissioned by the Ballard Alliance, including 10 other murals and seven utility box wrappings designed by local artists.