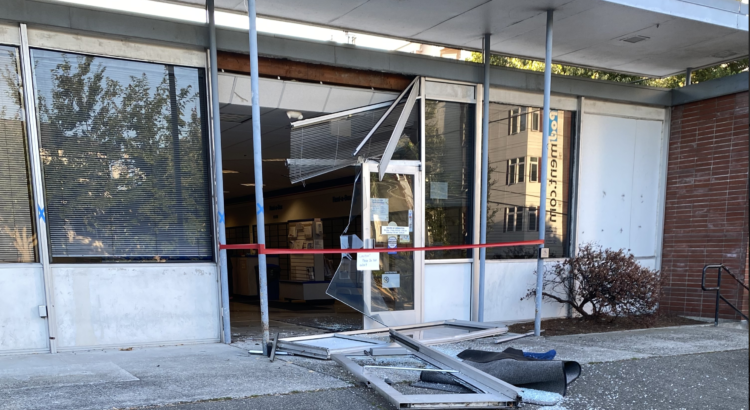 “SPD detectives are investigating after a group of burglars stole a kiosk, containing nothing of value, from a Ballard post office early Thursday.

Around 4:30 AM, police received a report that three men in a pickup truck had used a chain to rip the front door off of a post office in the 5700 block of 17th Avenue Northwest, and then sped away with a self-service postage station.

At this point, investigators do not believe the postage station contained any money or anything else of value.

Police later recovered the suspect’s truck and the postal machine in the 7200 block of Detroit Avenue Southwest. Detectives are investigating and continue to search for the suspects.”

Original: The doors of the Ballard Post Office were torn off last night in an apparent forced entry.

The post office door was lying on the ground this morning, surrounded by broken glass.

We have a call out to Seattle Police to learn more about the incident and will update you when we have new details.

Thanks Chris for the photo and tip!