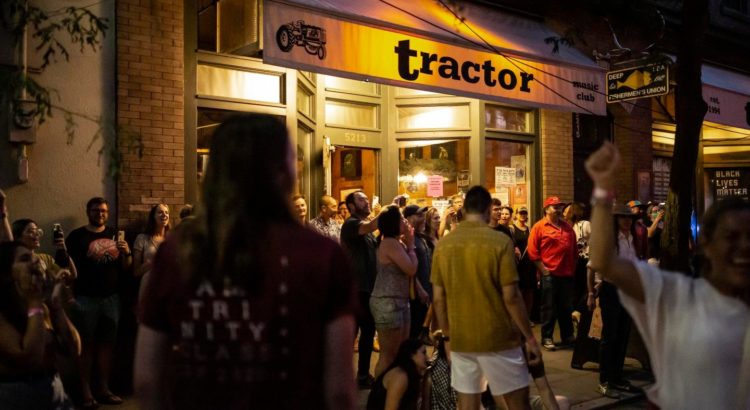 A group of Ballard businesses hosted an event this week that raised $15,915 for abortion access and healthcare.

Leigh Bezezekoff from the Tractor Tavern tells My Ballard that a few hundred people gathered for the fundraiser, the proceeds from which went to Indigenous Women Rising and ARC Southeast.

“Initially, I was so despondent when the verdict was announced. It felt so much bigger than me, or any of us,” Bezezekoff said.

“But to watch an entire neighborhood come together to make this event happen gives me so much hope. Walking up and down Ballard Ave seeing everyone wearing our pink FTS wristbands and seeing the poster hanging in windows, it was overwhelming in the best way.  We can do something about it. Together.”

About half a dozen musicians performed for the event spread out between the three venues.

“Seattle indie rockers Naked Giants packed out the Tractor Tavern after an emotional and cathartic collective yell erupted outside of the venue as attendees and bystanders shared their collective frustration about the recent Supreme Court decision to overturn Roe vs. Wade,” Bezezekoff said.

The fundraiser also included a raffle drawing that raised nearly $4,000, with prize packs including items donated from Ballard businesses, breweries, and individual artists/makers who usually appear at the monthly Tractor Tavern Makers Market on the second Sunday of each month.