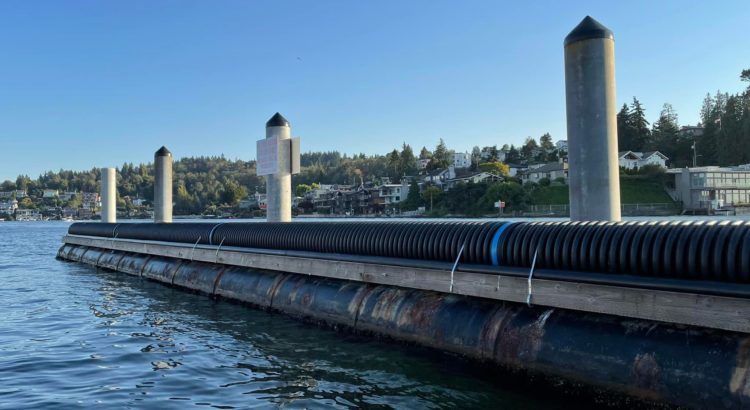 The owner of a private marina in Ballard has made a major alteration to a pier that has often been a hangout for California sea lions.

The floating pier in Shilshole Bay was once a flat surface on which dozens of sea lions would congregate at a time. It’s something of a spectacle in Ballard: After the sea lions spend their summers further south, they return to the Puget Sound to feast on salmon, where they’re often seen having lunch on Chinook at the Ballard Locks.

Real estate executive John Goodman owns Golden Tides Marina, and the pier is a breakwater for the private docking area. Last week, he installed a large pipe on top of the pier, eliminating the flat (but unstable) platform where the sea lions would hang out, jostling for the best position.

As the Seattle Times reports, the land beneath the pier is owned by the Department of Natural Resources (DNR), which technically owns the pier, leasing it to Golden Tides. DNR supports the pipe installation because it will likely discourage the Shilshole Bay sea lion congregation and the annual salmon-eating frenzy.

This isn’t the first time sea lions have been actively discouraged from loitering around the Ballard Locks.

In 2020, the U.S. Army Corps of Engineers, Oceans Initiative, and other groups deployed an underwater noise-making device on the west side of the locks. The device, known as Targeted Acoustic Startle Technology (TAST), was intended to keep harbor seals and sea lions away from the salmon fish ladder.

A 2021 follow-up from Oceans Initiative reported that more than 4,000 additional salmon passed through the locks to spawn.

It will be some months before the sea lions make their way back to Puget Sound, so time will tell if they manage to find a new Ballard hangout spot.