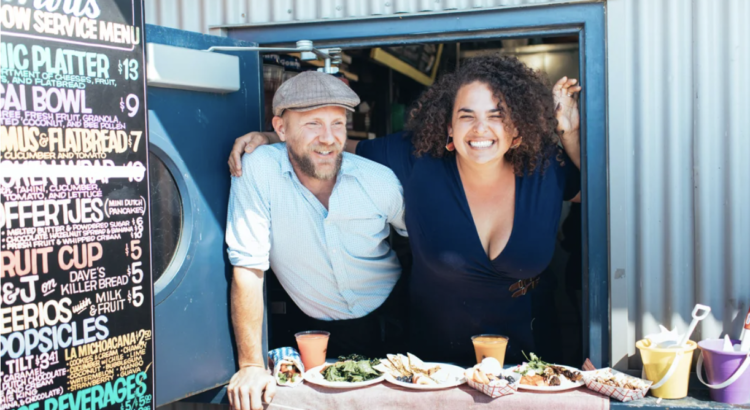 The beloved Miri’s at Golden Gardens is closing down later this year after five years in business.

Miri Plowman and Gabriel Skoda opened Miri’s in 2018 in the concession stand attached to the bathhouse at Golden Gardens. The cafe quickly became a favorite, serving poffertjes (mini Dutch pancakes), kebabs, breakfast sandwiches, and all sorts of cold beverages and snacks to beachgoers.

Now, Plowman has announced in her newsletter that they will be closing for good, with their last day of service planned for Dec. 18.

“We had a magical dream when we opened. We wanted our shop to be part of the fabric of quality time in Seattle. What if you could get really good food in a magnificent location in Seattle city limits that wasn’t Ray’s/Westward prices or Sysco truck-to-freezer-to-fryer quality,” she writes.

Plowman explains that she always dreamed of owning a brick-and-mortar restaurant, but Golden Gardens’ concession stand was a “work around” of that goal.

During the pandemic, Miri’s switched to window service only, operated with a sized-down staff, and “pushed through eight months of a locked parking lot.” The City of Seattle deferred their rent during that time, but didn’t modify what they owned, she says.

Plowman said the seasonal nature of Golden Gardens made hiring difficult and requires that she and Skoda often put in long days to make it work. She said that while they’ve had record sales the last couple of years, it’s time to move on.

“I know that for many of you, our little shop has become a fixture in your lives. As you have become fixtures in ours, and we are so grateful for you and your support over the last five years,” she writes. “We’re so grateful for all the staff- even the ones that left us on not the best terms-who all added their little something to the dream. Our lives are forever changed.”

Miri’s last day will be Sunday, Dec. 18. They’ll be throwing a big party in the bathhouse sometime during that last week as a “celebration of life” for Miri’s.