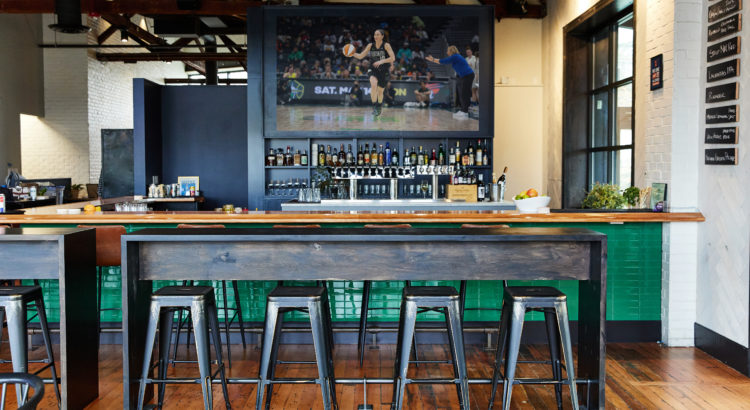 Rough & Tumble has moved into the former Sawyer location in the Henry Whyte Building on Shilshole and 22nd.

Owner and founder Jen Barnes said the idea for Rough & Tumble was born from a desire to watch women’s sports on the big screen, “with sound, and not in my living room. Today, I’m investing in women’s sports and the business of women’s sports because it’s an imperative.”

Barnes said Rough & Tumble will prioritize women’s sports, with a focus on OL Reign, Seattle Storm, and women’s collegiate games. The bar will have a 110-foot video wall with 18 screens, which Barnes said will feature a number of both men’s and women’s sports—the Seahawks, Kraken, Mariners, and Sounders will all be broadcast in the bar.

Chef Tessa Roberts is heading up the kitchen, with pub classics and ingredients from farmers at the Ballard Farmers Market.

“It’s great to see this vision come to life as the demand for women’s sports is increasing at a rapid rate. This past season we witnessed teams across the league shatter attendance records, including OL Reign, and for the first time ever the NWSL Championship aired during primetime, breaking viewership records,” Michelle Haines, OL Reign’s VP of Marketing & Ticketing said in a statement about Rough & Tumble. “We’re thrilled that there will be a new home for fans of women’s sports to gather together and very excited for our loyal supporters to have a new and inclusive environment to watch all our matches.”