After over two hours of presentations, comments and debate in front of a standing-room only crowd, the Seattle Landmarks Preservation Board voted 6-3 to designate the exterior of the Ballard Denny’s a city landmark. “I’m very surprised,” said Allan Michelson, who spoke out in favor of saving the Denny’s. “I couldn’t tell which way there were going. It was tortuous.” Before the vote, many of the board members admitted they were “on the fence.” The building “has a hard time crossing the integrity threshold,” board member Ronald Martinson said. Christine Howard said she was “struggling with the integrity.” But board member Stephen Lee (on the right below) led the charge in favor of saving the building. “To me this building bookends Ballard and still has enough integrity,” he said, noting that he lives nearby. 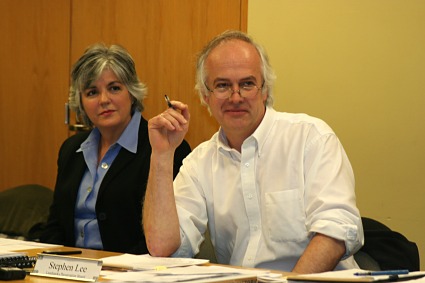 After ten minutes of discussion — which followed a lengthy presentation by land owner Benaroya Companies as well as public comment — the board reluctantly took it to a vote. Martinson and Howard were among the six board members who ended up voting in favor. 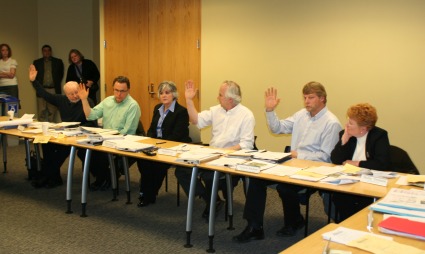 John McCullough, the attorney hired by Benaroya and Rhapsody, made it clear after the vote that they’re weren’t done fighting. “The issue is not to build on the remaining property,” he told the surrounding media (photo below). “The issue is what the land owner paid for (it).” 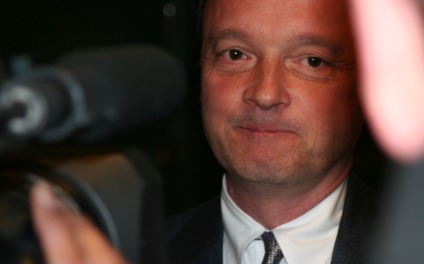 McCullough said the next step is to show that the board’s decision “deprives the property owner of economic use of the site,” which goes to the Hearing Examiner and ultimately the Seattle City Council. When asked about an alternative plan suggested by Grace Architects that would incorporate the restaurant along with the same number of condos (below), McCullough said it’s “highly unlikely to obtain the 125-foot rezone” that the plan would require.

Meanwhile, a group of Denny’s supporters who gathered down the hallway after the vote proclaimed they were ready for the next stage of the fight. “There will be plenty of opportunity to rehabilitate the building effectively and make it an integral part of the community,” Michelson said, who’s the head of the architecture library at the UW. “With minimal effort,” he added. 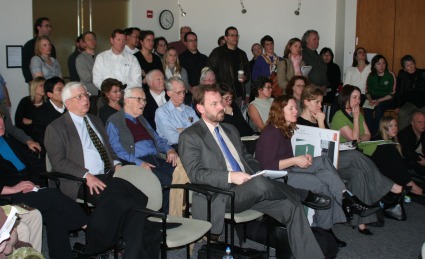 The room was packed for the board session. Only a small handful of the public who addressed the board spoke out in opposition of landmarking the building. One of them was Ken Alhadeff, the owner of Majestic Bay Theatres. “If you choose to designate, you must be part of the solution,” he told the board. “And then what? What’s the next step? Who will restore it? What will it be?”

Our minute-by-minute coverage of the meeting follows below…

Today (Wednesday) is the big day as Seattle’s Landmarks Preservation Board is scheduled to vote on the fate of the Ballard Denny’s. The meeting will begin at 3:30 p.m. in Room 4060 of Seattle Municipal Tower, 700 Fifth Ave. The item is about 40 minutes in on the agenda (pdf). Keep a close eye on […]

Remodeling is under way on the old Harvey’s Tavern building and the former Vac Shack just east of NW 8th on Leary Way. Just look for the Tyvek-clad buildings next to The Dish Cafe. A liquor license application on the building lists the applicant as Emissary, but a recent interview with the guys starting it up say […]

After 20 years on Phinney Ridge, Couth Buzzard Books is closing, according to the owners, who say they lost their lease for the used book store. A hunt for affordable space in the area that also fit their unique needs came to naught. They need at least 3,000 square feet and high ceilings to accommodate […]

Not only is there a lunar eclipse happening Wednesday night, the Department of Defense could shoot down that errant satellite near Hawaii around the same time, opening up the possibility we could see debris from that entering the atmosphere like a swarm of meteors. A partial lunar eclipse starts at about 5:40 p.m. and the […]

Some employees getting the Ballard Mandarin restaurant ready for opening at the corner of Market and NW 8th hope to have it ready to go by the end of this month or early March. It turns out it’s owned by the same folks who own Greenwood Mandarin on Phinney Ridge at 73rd and Greenwood. When […]

As we posted before, Sonic Boom Records is closing their Fremont operations and expanding their inventory in Ballard. And today (Monday) is the last day the Fremont store is open. Seattlest checked it out and said the liquidation sale is “awesome and included new releases and vinyl.” So head on down there for some last-minute […]

You may have seen the story last week that the Seafair Pirates appeared in photo shoots for Sports Illustrated’s Swimsuit Edition (photo). But did you know that Victoria Glenn, a teacher at the New York Fashion Academy here in Ballard, spent months creating the costume for the pirate captain? “It takes a lot of work,” […]

That’s what anonymously posted fliers are touting at the construction site where flooding washed out a portion of the road last December. The organizer(s) suggest the drive be turned into a one-way road for traffic going downhill, with the uphill lane converted into a bike and pedestrian path. It’s being pitched as a way to enhance bicycle […]

Look, a little chew toy for your pet. Seen in the window of Bark, 5338 Ballard Ave.