A few weeks ago, Geeky Swedes stopped in at Zayda Buddy’s on Leary and said some positive things about the wings and the Midwest style pizza cut into squares, but didn’t say word one about the impressive selection of middle-American bottled and canned beers, including a favorite from Wisconsin, Leinenkugels (pronounced, “Line-en-koo-gulls”).  If you’re not from the land of cheese curds and brats – two things they also serve at ZB’s – don’t bother trying to pronounce it, just say you want a “Line-e’s”. 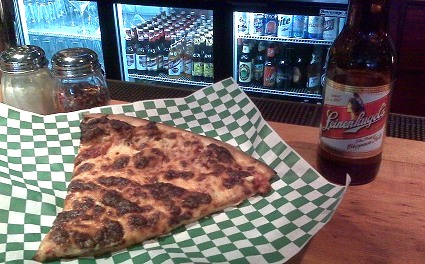 The beer list reads like a who’s who of a Midwest dad’s favorites including Blatz, Schlitz, Hamm’s, Grain Belt, Old Milwaukee and Old Style. For a place opened by a guy from Minnesota, I was surprised to not see any Schmidt. If you don’t want ex-pat comfort beer, there’s a good selection of micros too, including Manny’s and a rotating tap from Maritime Pacific’s brewery a few blocks away.

Another Midwestern trait is a very friendly staff, including John Paul, who tended bar and waitstaffed a very busy restaurant seating area earlier this afternoon. More surprising, John Paul grew up on Queen Anne, further eroding the axiom that all Seattleites are standoffish. Ah, and for those of you weirded out by pizza cut into squares, they have a couple pre-made pizzas cut into slices for individual orders. Even though my pepperoni and cheese slice was pre-made, it still had that heavenly cracker-crisp crust.