Seattle police have released some new details on the suspect arrested for the murder of Manish Melwani, the clerk at the “Pit Stop.” This afternoon SWAT team members made the arrest in a house in the 900 block of NW 60th St. 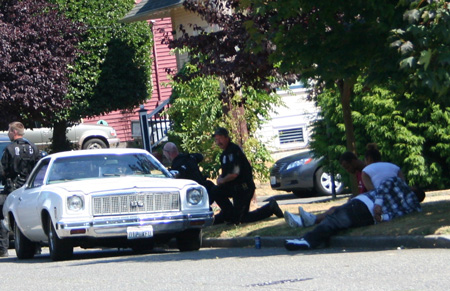 Detectives say he’s only 17 years old, and he’s been booked into the Youth Service Center for investigation of murder. His name is not being released due to the fact that he is a juvenile. 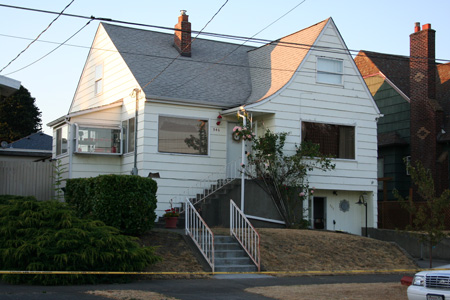 The house where the arrest was made is still cordoned off Monday night as police continue their homicide investigation. One concerned neighbor told us they’re planning to invite SPD to meet with the street’s block watch group. 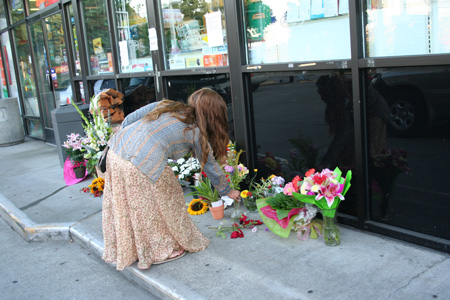 Meanwhile, the memorial is growing at the convenience store where Melwani was killed early Sunday morning. Friends, family and Ballard residents have dropped off flowers and messages in his memory.

Congratulations little guy, you're an adult now and they're gonna love you in Monroe!

What a waste of a life. Stupid kid. So sad.

My heart goes out to the family of Melwani.

What a dick. A 17 year old tough guy thinks he's entitled to take the life of a respectable human. Words are excaping me right now.

try him as an adult. There is no rehabilitating a sub human like this.

Absolutely horrible. My thoughts are prayers are with Manish Malwani and his family. Any act of violence is troubling but having it occur so close to home is especially troubling. Hooray for the officers that took this guy off the streets!

Got er done guys (and gals)!

I hope he gets a long sentence, I don't want him back in Ballard for a VERY long time. Especially while the poor clerks family that live here will never see their loved one again. The last thing they need is to think that this killer could be back in town in a few years.

So, a kind hard working man was taken out by that little piece of shyte?!
Try him as an adult. Please. He has no business walking around free.

One block up and one block over from me. Must have walked my dog past that house 40 or 50 times. It really hits home how a) little I know about my neighbors, and b) I feel more comfortable with the decisions I've made with regards to my personal safety.

Can someone school me about what it means for the suspect to be underaged? Does a court decide whether he is tried as an adult? Is it common for 17 year olds to be tried as adults? I hope that the full extent of the law is brought down on this thug. It's all too heart breaking. My kindest wishes of solace to the family and friends of Manish, whom I did not know, but have been uplifted by the warm descriptions of him by those who did know him.

All good questions Daisy, but I'm as clueless as you are on this. But I've got faith that the King County prosecutor's office HAS to try this kid as an adult. How couldn't they? From what I know of crime rankings, armed robbery resulting in a fatality is about one of the worst things you can do.

Washington State is one of 23 states that has NO minimun age for a juvenile to be tried in (adult) criminal court. This suspect is looking at a charge of Murder One, since it was murder while in the commission of a robbery. (the same would be true in a case of rape, kidnapping, or arson.)
Washngton is one of the states that have laws that exclude certain kinds of cases from the jurisdiction of the juvenile court and require that they be tried in criminal court.

Chances are, with the mitigating circumstances, that the suspect will in fact, be charged as an adult.

I am very sorry for the family of the cictim. If there ever was a “senseless crime”, this was it.

What a waste, all over a couple of dollars. Sickening.

The sad part is that no matter how much this doesn't make sense, things like this will always happen because, as a species, we're always capable of the worst.

“…don't want him back in Ballard for a VERY long time.”

How about NEVER back in Ballard. The only place I'd like to find that kid is at the bottom of the Puget Sound with a couple of cinder blocks tied around his leg…fish food!

i am very pleased that they have a suspect in custody.

i'll be very disappointed if this little LOS is not tried as an adult.

so, where are the parents in this story – do they even live at that house also or what?

Sigh…yet another schmuck who will sit in prison on our dimes. He killed in cold blood, can we kill him…ohhh nooo..thats to inhuman. Lets just feed him on “death row” for the rest of his life. America is pathetic, eye for an eye, that my motto. I really wish America had the balls to kill death row inmates. Were so pussy foot about people, I'd bet millions upon millions that if we ever caught Bin Laden, we would'nt execute him.

Bin Laden? WTF? If America killed him that'd turn him into a martyr

True, Bin Laden will die, but not by our justice system. (thank Allah)
This punk (P.O.S., thug, etc.) will be treated all too well, but he will be named when charged, as an adult.
Hey, but now he has 'street cred', which is always the primary goal for these idiots. All his posse thinks he's the 'man'.
Any word on how this punk got his gun, and where it is?
Profound respect for the SPD, that was a quick capture.
I hope to have respect for the D.A., we'll see.

We wonder what other criminal activities this person might be involved with. Is this a drug dealing house?

And what about the people who are innocent? You ever see the movie “Hurricane”? I'm all about eye for an eye but you better be absolutely positive. And if America is so pathetic, why are you still here? I hear Darfur is lovely this time of year.

Bet the neighbors could tell you that. Going down my list of bad roommates I can tell you drug dealers aren't as hard to spot as they think they are.

Tough to tell. It was settled by an estate and sold to James Phillips Robert in 1985 for $44,500. At such a low price, you could rent that out and cover whatever type of low mortgage you had extremely easily. If the suspect is 17 years old that means the owners of the house have owned it his entire life. Anyone remember different residents at this location every year?

Until he is charged, arraigned and indicted, I'll say nothing.

Per the Seattle Times
“Neighbor Emmy Jordan said the house has been in the same family for several generations. Lately, she said, “it's been weird around there, with lots of strange teenaged kids coming and going and no adults around.” She did not know whether any of the young people she had seen was the suspect.”