First on My Ballard: Seattle Police say they arrested the suspect in yesterday’s gas station murder at a Ballard home just two blocks away from the crime scene. “We’re confident we got the man from the video,” police spokesman Jeff Kappel said. The SWAT team made the arrest around 3:00 p.m. in a house on NW 60th St. just east of 11th Ave. NW. 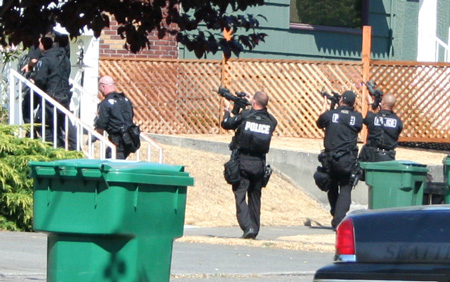 Neighbors say the SWAT team moved in quickly. “I heard police show up and yell for people to get on the ground,” said a neighbor who asked we not identify him. When we arrived, SWAT officers had their guns drawn, surrounding a white house. A few minutes later, officers moved in. 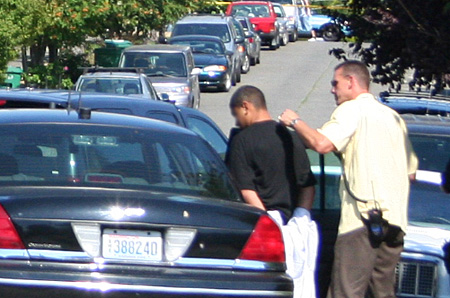 Police say they arrested the suspect, another man and a woman. This is a photo of one of the two men — it’s unclear if he’s the murder suspect — as officers load him into a police vehicle. “I’ve seen some parties the last couple weeks and a bunch of young kids,” a neighbor said. “It’s a little freaky.” 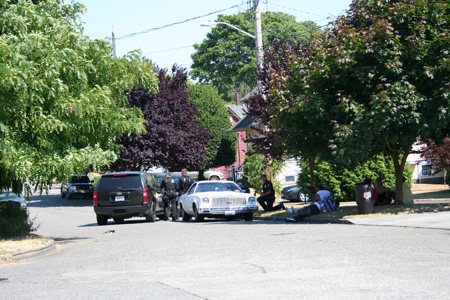 Detective Mark Jamieson says the suspect was tracked down the old-fashioned way. “Basically it was just good police work. Some good detective work led us to this location,” he told the media. “We had information that the suspect might be in this area and he was taken into custody this afternoon without incident.” The suspect is now downtown talking with homicide detectives. 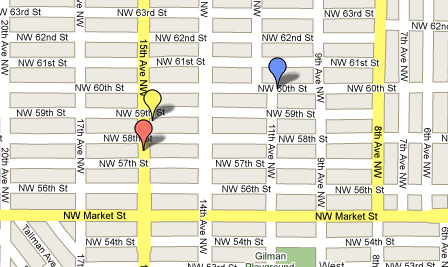 This map shows the proximity of the murder (red), where the suspect dumped his clothing (yellow) and the scene of the arrest (blue). This morning family members identified the victim as 28-year-old Manish Melwani of Lynnwood.

On the SPD's blotter blog, the department is talking up some kind of a “gang crackdown” the past week or so, including a bust at SeaTac last night. Could be a part of that, or the Red Mill Burgers ketchup bandit.

Wow, that would be fantastic if they had caught the gas station killer so soon. Fingers crossed one less psycho on the streets of Ballard.

I saw a black SUV doing about 60-70 northbound on 15th with lights and sirens, got back to the office it was already on the blog.

yeah, gotta give props to My Ballard for doing such a great job covering all these stories lately

Yeah, got to give props to My Ballard for doing such a great job covering these stories lately.

Seattle PD blog said it was an arrest for the murder of the convenience store clerk Sunday morning.

Very good news.
I hope he gets the maximum penalty allowed.
And Thanks to the Swedes for the best coverage available!

This in from Channel 7

Way to go SPD! that scumbag probably started bragging to his loser buddies and somebody with a concience contacted the cops, Great coverage My Ballard.

I so very much that this is the start of the end of one part of this story. Part of the healing for the family will be seeing this guy brought to justice!

Nice that they've caught him so quick.
The other people in cuffs are probably only involved in as much as that they live there too. The police will cuff anyone on the premises until they sort out who's who.
Whenever I hear a helicopter hovering overhead I just check MyBallard and then King5 to see what's going on.

Thanks for the great news!

I hope this is right suspect. Way to go SPD!

Yeah, I always check MyBallard first too. Great job, Geeky Swedes! Great job, SPD! I hope this is the same a-hole and he gets the justice he deserves. Well, from a legal standpoint anyway.

I'm very glad they caught him. But can the helicopters please go home now!!!

There were a couple of those. And cops with *big* guns.

With all the windows opened I heard the helicopter too, but it took a while to register, and then I went outside and spotted it from my front yard at 63rd and 9th. Pretty scary to know that everything was so close by. Thanks so much for keeping us informed!

Agreed – too close for comfort. Not surprised that it was that house, though.

On KING 5 on the 6 am news this morning they mentioned “Myballard.com”
The blog can't prevent crime but it helps us know what is happening in Ballard and it helps us become more involve when something does happen. Thanks Geeky Swedes for all the work you do to keep it up dated.

Is it premature to start talking about Soap on a Rope?

Hey, we've got map now. Geeky Swedes are the best kind of geek. :-)

It was just on the news about the arrest and they said the photographs of the arrest were “courtesy of MyBallard.com” Once again recognition for one great website.

Oh, so like, you 'feel' better now. That it? The people in seattle are so 'weak'. Crawl out that 'comfort zone'. You could end crimes like this, if you EVER find some real back bone. And no, the SPD dont have big guns, the gangs in LA headed to Seattle have BIG GUNS. They could care less about the police, FBI, etc. Protect yourself. If you think gangs get 'scared straight' when they go to jail? You fooling yourselves. wake up. The women killed in cap hill during xmas? 40 people heard her screaming for 10 minutes, someeven saw it – NO one did anything. If you cant step up, USE YOUR CELL! We step up to crime and do something every chance we get in L.A. to handle crime. In seattle “they write comments'. Thinking that works. Fools. Seattle has ALWAYS dealt with 'serious issues' – way too late. – I lived in seattle 32 years. – live in LA.25 years. I should know. These are 'facts', not retarded, “feel good”, standard issue seattle opinions/comments. Anybody here deal with 'r-e-a-l-i-t-y' yet? – you will. The police in this 'town' are even scared.