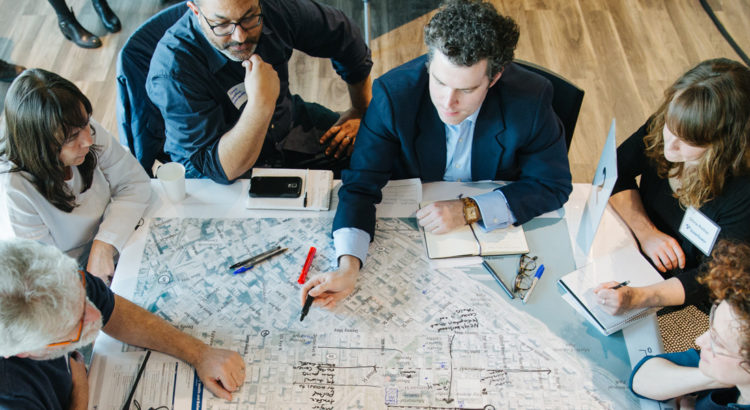 The options for the Ballard light rail route have been slightly narrowed down, thanks to recent town halls and public feedback.

There were a handful of options presented by Sound Transit, with seven different alignment and Ship Canal crossing proposals being considered. After compiling feedback, the Stakeholder Advisory Group (SAG) has chosen to advance the following proposals:

Central Interbay/Tunnel/15th This proposal also includes the tunnel crossing under Salmon Bay, and a tunnel station straddling the east side of 15th Avenue NW and NW Market Street.  There is some concern that this tunnel could cost more than the Armory Way/Tunnel/14th proposal.

There were concerns about the effects of another bridge near Fishermen’s Terminal — the Port of Seattle has publicly opposed a movable bridge near the terminal because it “could impede maritime mobility”, according to a letter addressed to elected officials from Port of Seattle Executive Director Stephen Metruck and Northwest Seaport Alliance CEO John Wolfe, as reported in the Seattle Transit Blog. Alternatively, a fixed bridge south of Ballard bridge or tunnel under Salmon Bay are more likely options.

For the Ballard station, proposals for 17th are no longer recommended, with a clear preference for a 15th Ave NW station.

For more about the Ballard light rail extension project and to stay updated on the progress, click here.

Thanks, Carson, for the tip!

I feel the 14th/Armory Way – with an underwater tunnel – will create the least impact on extant traffic lanes. Having said that, it’s probably the one that will get the least support. :(

That route has decent support, especially as it’s the cheapest tunnel! It made the cut as one of the three out of seven to be further studied.

The primary downside is that it’s not on 15th which makes getting off a bus and on the light rail more challenging, and it’s farther from Old Ballard. A tunnel station below 15th shouldn’t impact any lanes, other than during it’s construction.

It’s troubling that the these decision makers sitting at table 2 can’t even find Ballard on the map. Maybe the guy with the black marker and the suit coat from his high school prom should put his glasses back on.

“And here is where we will put a Starbucks. Here’s where the homeless camp goes. This dollar sign here is another mixed use building, and here is the proposed station location.”

Why not just have the station at Ballard Commons? Wouldn’t that be the most efficient way to shuttle hobos back and forth from downtown? The junkie express!

Ahh, I see you are a man of culture. Run for office!

I oppose a fixed bridge. Just more places for junkies to hang out injecting themselves.

Tunnels cost more to construct than do bridges. They cost less to maintain, require far less land acquisition (eminent domain) and are.better in earthquakes.
Tunnels last longer. Subway tunnels from 1902 survived 9/11 in the area under the attack. Sound Transit seems to know how to build tunnels — any ST bridges yet?
So, build to last! Tunnel it!

Tunnels take longer to access, which means everyone who uses it spends extra time getting to it. Elevated lines are also popular, especially in a pretty city like ours (the monorail is the only public transit system we have that actually makes money). As a result of both of these factors, more people are likely to use an elevated line, rather than one underground. With fewer riders, you have less fare money. Fares are used for things like maintenance. Vancouver built a very nice rail system called, you guessed it, SkyTrain. Much of it is elevated, and it is carries way more riders than ours, and they have managed to maintain it just fine. In every respect, their system is not only better than ours, but will continue to be better than ours, even after we have about twice as many miles as theirs. Yet we ignore the lessons of their system (or any system in the world) and keep plugging away, thinking that a station at 14th is just fine, or that forcing riders to get from Ballard to the UW via the 44 is OK. Ballard got hosed with ST3 when the board ignored the Ballard to UW… Read more »

Huh. This sounds like a perfect “shovel ready” ready job for all the out of work “homeless” who seem to just stay high all day and steal. I would support employing them all “New Deal” style to do low skill grunt work to help get this built.

Ok, show of hands for how many of you would BELIEVE THEY WOULD ACTUALLY WORK IF OFFERED JOBS.

It’s on that dude’s cuff. Somebody tell Mike O’Brien.

I am still holding out for an extension and light rail station at 15th Ave NW and NW 85th St.

The only way that will happen is if the station is above ground, and above 15th. Extending a tunnel is simply too expensive. Extending elevated on 14th just won’t work (too narrow and too many things in the way north of 65th).

When reading prior comments on 17th vs. 14th as the conduit, it became clear that transit near density (17th) would be more disruptive of a process, and much smarter in the long run to actually serve Ballard well with mass transit. Seattle doesn’t have much of a history of good transit planning, though. Making lots of people cross 15th to get to transit=brilliant. Just one example. 17th was a good idea, if too sophisticated for Seattle to a) comprehend, or b) pay for (THAT COSTS MONEY!! ACK!! SCREAM! WAIL!!), so the day, long from now, that transit’s actually in, it’ll be a monumental f-up. So many cities can do this-SF put in a new Bay Bridge for crissake-wish we could.

Exactly, except now they want to make it worse! 15th is not great, but 14th is terrible. Not only must the vast majority of people cross 15th, but they have to walk an extra three minutes just to get to the station. Those that want to connect from the north (e. g. 80th and Ballard) will have to walk that extra distance, or wait as the bus takes forever to turn and get there. All of this will actually cost *more* money that what they originally proposed. Maybe they should be ST’s motto. Spending more to get less since 1996.

A bridge south of Ballard Bridge? Don’t you mean east or west?