Ballard resident escorts family of ducks off apartment balcony, all the way to Salmon Bay – My Ballard Skip to main content 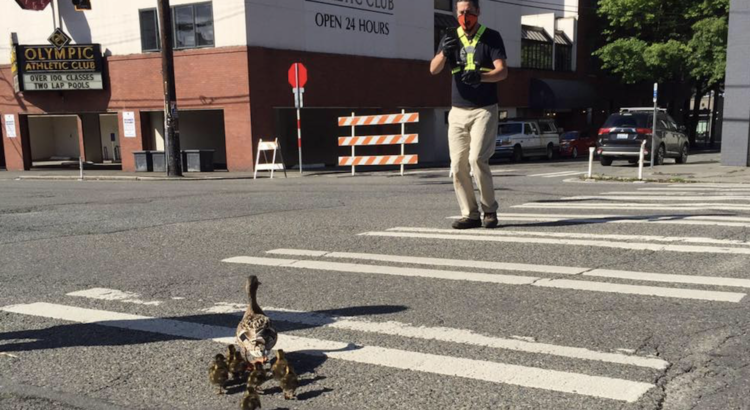 For Nathaniel Peters, helping a brood of ducklings off his balcony is a bi-annual occurrence.

He’s done it so many times that he now has a name for it: the Ballard Mallard Duckling Drop. On Sunday, June 14, Peters helped the latest duck family off his balcony in central Ballard for the second time this year, and the seventh time in four years since he’s lived in his apartment.

With help from his partner and a neighbor (and guidance from local wildlife rescue workers), Peters fashions a duckling elevator from a plastic bin and lowers them carefully down from the balcony to the sidewalk below. Once safely on the ground, the brood and their mother get a personal escort a few blocks away to Salmon Bay, where Peters sees them off.

Peters says he believes it’s the same mother each time, and that she picks almost the exact same dates in April and June each year. He says after she lays the eggs, they take about 30 days to hatch, and then 30 days to grow large enough that they can take their duckling elevator ride to the sidewalk and begin their journey out to the Ship Canal.

“Today, we had one that was always behind. We named it Scrappy,” Peters told My Ballard after the operation. Peters says during the first duckling rescue four years ago, one of the ducklings had also fallen behind; Peters saw that it was injured and brought it to a wildlife rehab center. The duckling had to be put down, and Peters says it was an emotional experience for him.

“Unlike the first rescue, however, Scrappy never stopped. It would stop and we would have to wait, but the little one made it all the way. At the end the mother circled back to Scrappy in the water when it finally caught up. It was amazing.”

“Each time we do this, our priority is the safety of the ducklings and their Mama,” Peters writes.

“We herd them away from storm drains, create safe routes of passage across busy streets, and insure the safety of our little feathered neighbors. We believe that this is what good neighbors are supposed to do. We look out for each other. We help each other when help is needed. We support each other when we fall down or fall behind.”

12 thoughts to “Ballard resident escorts family of ducks off apartment balcony, all the way to Salmon Bay”