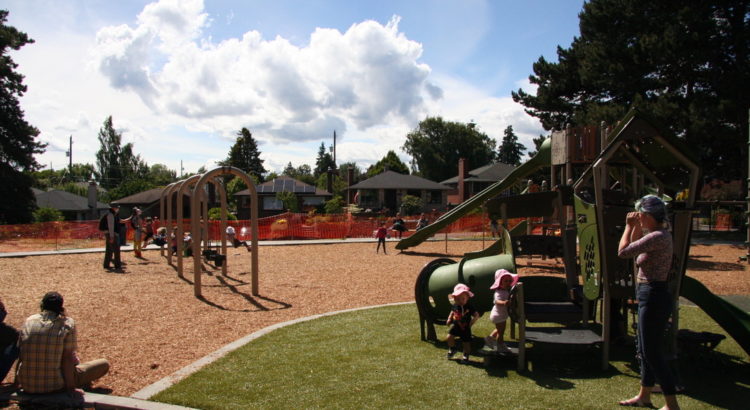 The Loyal Heights Play Area on NW 77th St and 21st Ave NW reopened on June 3 after five months of construction to update the facilities and make it more accessible.

The play area has been in the works for years: Back in 2017, Seattle Parks and Recreation began collecting feedback for the new playground, which was supposed to be built in 2018.

The long-awaited new play area includes a swing set, slides, climbing structures, a plaza with picnic tables, and a smaller climbing structure for younger children. The playground also includes a water fountain, plus accessible pathways connecting the play area to the Loyal Heights Community Center. The entire playground was made more accessible to be in compliance with the Americans with Disabilities Act.

Lakewood-based company Green Tech Excavation began construction in early January, removing the old structures and adding new equipment from Landscape Structures. The project was funded by the 2020-2025 Parks, Recreation, Trails and Open Space Levy, and was given a budget of $600,000, according to a June 8 press release from Seattle Parks and Recreation.

Planning and design began in the fall of 2017 and included multiple meetings and a survey to gather community input. Katie Ford, a parent and Loyal Heights resident participated in the survey and is very happy with the finished product.

“I don’t think we realized how much we missed a space here,” Ford said. “I feel like we got super lucky because I have a one-year-old and a six-year-old… feeling like both [are] perfectly accommodated, and also knowing that it’s a space they can grow into is really special.”

Another parent, Salma Schoenberg, agreed that the play area is “a vast improvement, for sure, from the old one.” Her six-year-old loves the cylindrical rope climbing structure but she also noted that there are features at other nearby parks that would’ve been good additions.

“We live near Salmon Bay Park, so the only things that are missing here that [my son] loves are the zipline and a sandbox, but other than that, everything else is accommodated, for sure,” Schoenberg said. “We love it, we’ve been here every day since it’s been open.”