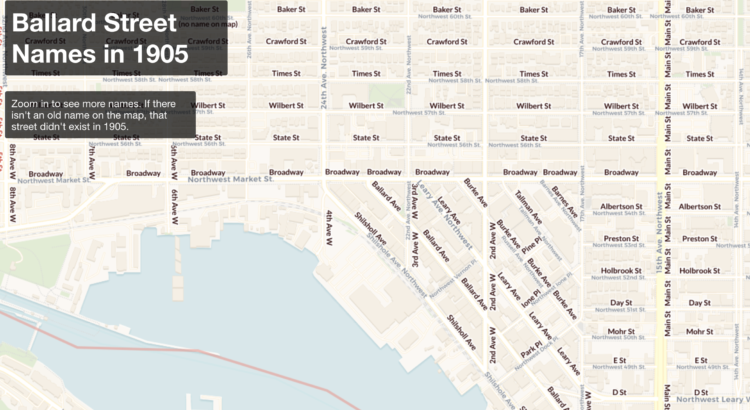 Did you know that NW Market St was once called Broadway? Or, that NW 65th St was called Ship Street?

Local geographer Andrew Wiseman has uncovered a treasure trove of century-old Ballard street names, and has put together an interactive map of the neighborhood with the old names.

“I live in the neighborhood and remember reading some neat My Ballard posts from a while ago about old maps, the previous Ballard street names back when it was a separate city from Seattle, and the little tile things in the sidewalks that have the old names,” Wiseman wrote in an email to My Ballard.

You’ve likely seen some of the old street names on mosaics, which were laid in the sidewalks to add to a project started in the 90s and updated in 2012 by the Central Ballard Community Council and Neighborhood Matching Fund and created by artist Benson Shaw.

“There are tiles on my corner which I think is really cool. I got curious and did some research. I’m a geographer for a living and I found an old 1905 map with the street names at that time, so I decided to make an interactive map so anybody could browse the area see the old names.”

In 1906, NW Market Street was Broadway, 15th Ave NW was Main Street, and NW 65th St was called Ship Street. Wiseman found that the north-south numbered streets were all different in 1905, with 1st Ave West instead of 17th Ave NW, and so on. He discovered that the current 8th Ave NW was in fact the city border of Ballard, with parts of it called Division Ave.

Wiseman said he took the data from the 1905 Baist Company which is posted online from the Seattle Public Library. The Baist Company, Wiseman described, made real estate atlases for cities around the country with information such as land ownership, what was built, street names, and so on.

When Wiseman was studying the Baist map, he found that some of the names were different, in which case he hadded both. “In some cases the maps only hadthe name and didn’t include St. or Ave. or whatever so I left it how it was on the map,” Wiseman explained.