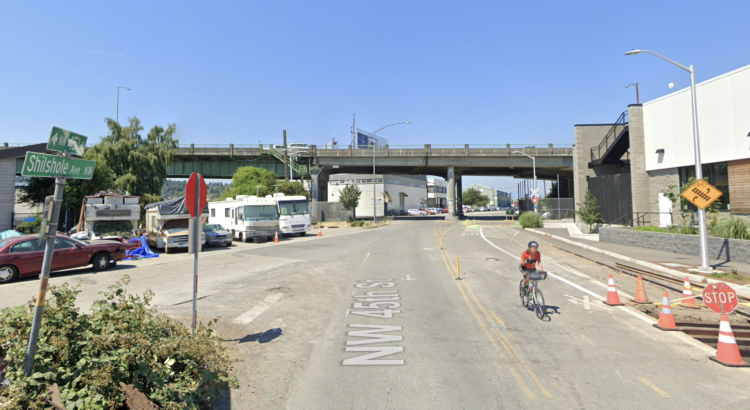 The City of Seattle has updated and simplified its Burke-Gilman Trail Missing Link design in an effort to get the project back on track and with a goal to start construction next year.

The project to connect the 1.5-mile section of the Burke-Gilman has been in discussion since the 90s, stalled due to the decades-long tug-of-war between the Seattle Department of Transportation (SDOT) and a group of local businesses and other cycling advocates.

SDOT has advocated aligning the new trail on Shilshole Ave NW, while the Ballard Cycle Track group wants to see it built on Leary Ave NW, away from the industrial traffic on Shilshole.Now, SDOT has refined the Missing Link plans to address some of the concerns of local businesses.

The refined plans include safety upgrades at industrial driveways and a fully separated trail. The new plans will also eliminate the need to relocate the railroad tracks and associated paving on Shilshole Ave NW and NW 45th St. SDOT says this will minimize project delays and expenses.

SDOT’s new plans maintain the alignment along Shilshole, but with some changes. The new plans include the following revisions:

One of the changes that will reduce the timeline includes maintaining NW 45th St as a one-way street. That will reduce both the project costs and the construction timeline for the Missing Link.

SDOT is hoping to complete the project before the voter-approved Levy to Move Seattle sunsets in 2024, minimizing the risk of increased costs.

If it moves ahead, the new timeline anticipates a seven-month construction period, which SDOT hopes will begin in late 2022 or early 2023. In the next several months, SDOT plans to finalize the project design and share updates; they expect preconstruction outreach will begin in the fall of 2022.