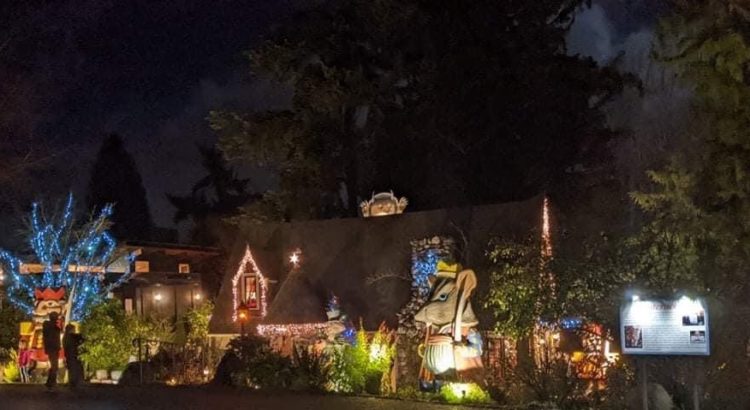 The larger-than-life Nutcracker display is back up this holiday season at Loyal Ave NW and Golden Gardens Drive NW.

Ballardites John Carrington and Scott McElhose have been carrying on the tradition since 2015, when Carrington, a harpist in the Pacific Northwest Ballet Orchestra, acquired the 15-foot-tall Nutcracker figure from a ballet colleague.

“It was My Ballard that gave me the idea for the genesis of this display,” Carrington said. He’s referring to this post from 2009, when the Nutcracker was displayed at his former colleague’s house on 90th and Dibble.

“I became friends with my ballet colleague who owned it,” Carrington said. After taking ownership of the Nutcracker figure, he wanted to add pieces to the collection.

“That gave me the idea in 2015 to ask about displaying the other pieces when the ballet retired the Sendak production and put the lobby figures into storage. I knew they could sustain being outdoors. Three years later the big guy joined the cast, who I refer to as ‘Maurice’—Sendak’s namesake,” Carrington said.

In 2020, the tradition almost took a hiatus because Carrington’s work slowed to a trickle due to the pandemic, making it difficult to cover the costs of the display. His neighbor launched a GoFundMe campaign to help out, which surpassed the goal and allowed Carrington and McElhose to keep the tradition going.

“It was an amazing outpouring of community support and generosity that gave me hope for the future that things would work out in a time of anxiety and uncertainty,” Carrington said.

“This year we wanted to be sure the display was back for its seventh year and even better than ever as a thank you to the community. A big shout-out to our neighbors who volunteer to come set up and take down each year on those cold and rainy early weekend mornings and for putting up with all the increased traffic on our quiet street.”

Carrington restored the animatronics on two of the figures, which he says haven’t been working since their original 1983 debut as a window store display. The Mouse King now waves his sword, and the Nutcracker crunches his mouth. Carrington also commissioned for the Nutcracker’s face to be repainted.

There are a few new characters in the display as well. Carrington added a figure from Where the Wild Things Are, “looking down from the roofline much as Sendak had it appear in his Nutcracker Act II opening boat scene where the monster was peering over the mountains,” he said.

The display will be up until January 1. Carrington said he recommends people try seeing it in the evening when it becomes illuminated starting at 4 p.m. daily when it takes on a “magical feel.”