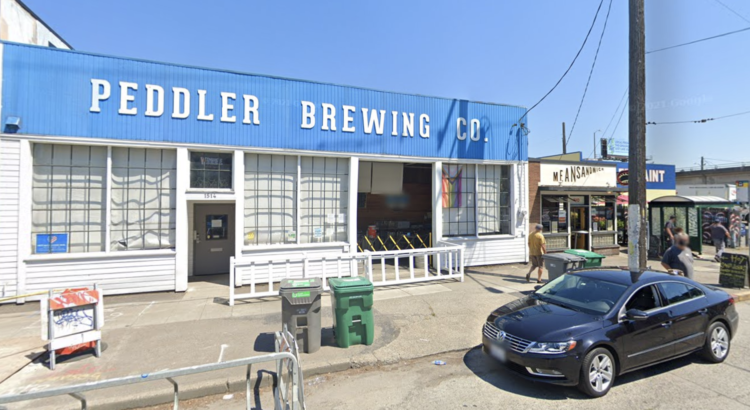 Renton-based brewery Bickersons Brewhouse is getting ready to open a second location in the former Peddler Brewing space at 1514 Leary Way NW.

Bickersons is named for co-owners Frank Castro and Shaunn Siekawitch: They’re married, and as Castro tells My Ballard, both serve up a lot of sass in their marriage. “We’re jokesters, we’re sarcastic, and we bring a little bit of that into the brewery,” he said. “‘Bickersons’ is our couple’s last name.”

Castro says they opened their Renton location just over two years ago, and have been looking to expand into Seattle for the past year. While they’re based in Renton, they have family in Ballard and spend a lot of time here.

Fans of Peddler will see many of the same monthly and seasonal events at Bickersons; Castro tells My Ballard that they’ll continue to host pun slams and astronomy nights, along with live music and summer movies.

“We’ll keep a lot of the same events Peddler did, and add a few new ones,” Castro says.

The structure will remain the same, but Castro said they’re putting new paint on the walls and replacing the branding as they take over the space. They’ve already begun taking advantage of having a larger production space, with plans to make Ballard their heavier production facility.

Castro said Bickersons is known for its variety. An analyst by trade, Castro loves experimenting and making new creations. He says much of what they choose to brew in Ballard will come down to what the neighborhood wants.

“Instead of making what I like, I try to figure out what the neighborhood likes, and try to give that to them,” Castro says, adding that means he’ll likely be expanding his IPA list to cater to the Ballard crowd.

Castro says they’ll work with Mean Sandwich and food trucks to provide food, and will continue to allow both kids and dogs in the brewery.

“We’re excited,” Castro said, adding that they’re looking forward to expanding to this part of Seattle and join the Ballard Brewery District. “I’ve met a lot of Ballard brewers over the last two years, and some of them I’ve known for longer, but I’m getting excited to meet other brewers and owners.”

While they don’t have an opening weekend pinned down just yet, Castro expects to be operational sometime in mid-April. We’ll keep you posted.